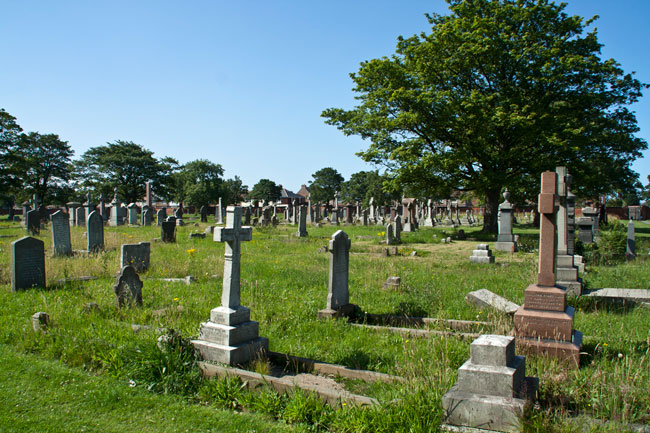 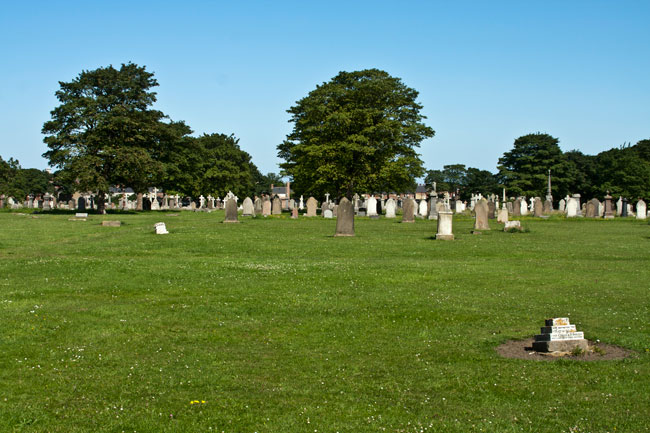 In this cemetery, the War Graves are no longer maintained. There are 60 First World War burials in the Hartlepool (North Road) Cemetery, 6 of which are for soldiers of the Yorkshire Regiment.

As the graves are no longer maintained (a search of the cemetery could find no relevant graves), the names of those buried in this cemetery are commemorated on a screen wall in Hartlepool (Stranton) Cemetery. Photographs of this Screen Wall and the commemorations, are shown at the bottom of this page.

Details of the six soldiers of the Yorkshire Regiment are below.

Notice taken from the 'Northern Daily Mail' in the former town of West Hartlepool.
On October 22nd, died of wounds received in action, Francis, son of the late Francis and Mary Allinson. Ever remembered by Uncle Dick, Aunt Jennie and family.
He answered his call.

On the 22nd inst, from wounds received in action, Pte Frank Allinson, age 20, dearly beloved and only brother of Sarah and Minnie Allinson. Sadly missed.
He left his home in flower of youth
He looked so young and brave
His life for king and country he nobly gave.

News Items taken from the 'Northern Daily Mail' in the former town of West Hartlepool.

Wednesday 21 July 1915
SUFFERING FROM GUNSHOT WOUND
Private Charles Johnson of the 3rd Yorks Regt, was admitted to the Cameron Hospital today suffering from a gunshot wound in the head. We understand that the injury was the result of an accident on the rifle range at Hart.

Thursday 22 July 1915
SOLDIER FATALLY WOUNDED
-------------
Whilst acting as marker at Hart Range
-------------
Private Charles Johnson, of the 3rd Yorkshire Regt, who was admitted to Cameron Hospital, West Hartlepool, yesterday, suffering from a gunshot wound accidently received at the Hart rifle range, has since died.
Yesterday, Johnson was acting as a marker at the rifle range, a bullet ricochetted from the steel plate and struck Johnson who was severely wounded in the head.
With assistance Lieutenant Fillingham conveyed Johnson to the hospital, but he died during the night.
johnson was 35 years of age and formerly resided at Alice street in Ryhope (Sunderland). He leaves a widow and two children.

The inquest was held at the Cameron Hospital, West Hartlepool, this afternoon by coroner Hyslop Bell.
Sgt John W Heap, of the 3rd Yorks, stated that the deceased was acting as a marker during the firing of the musketry course at four hundred yards range. The witness was standing about four yards from deceased who, with the other markers, was at least eight feet below the targets. From what witness saw a bullet came in suddenly and struck a stone or an iron plate or
something and before they knew what was happening the deceased was struck down.

By the coroner:
The bullet must have been deflected by something.

Witness, continuing, said he rushed to the telephone to summon assistance from the firing point and afterwards returned to the deceased, whose head, he saw, was cut open. Deceased was quite unconscious.
Second-Lieutenant Fillingham came and bandaged deceased's head. They also sent for a stretcher and a motor car and removed deceased to the hospital, while the firing was stopped.
Private Dobson, another marker, deposed that the shot struck the parapet of the butt and the soil came over on to the targets. Second-Lieutenant Geo J Fillingham, who was on duty at the firing point, said that as far as he knew every precaution was taken to prevent accidents.

Doctor W Gray, who saw deceased soon after admission to the hospital, found a wound at the back of the head which presented the symptoms of a fracture to the base of the skull. The wound led down at least two and a half inches into the brain substance and witness decided that no surgical operation would be of any avail, there being no hope from the first.

Miss A C Rastall, the matron, spoke to the deceased expiring about six hours after admission.

A verdict to the effect that the deceased was accidently shot while following his duties, and that no blame was attached to anyone, was returned.

Captain R M Gladstone, on behalf of the officers and men of the regiment, expressed sympathy with the relatives.

Notice taken from the 'Northern Daily Mail' in the former town of West Hartlepool.
On the 10th inst at 27 Briar street, James, the dearly beloved and eldest son of Margaret and James Thompson age 23 years and 6 months. Cortege to leave on Monday at 2:45.
Friends please accept this (the only) intimation.
Sadly missed. R I P. 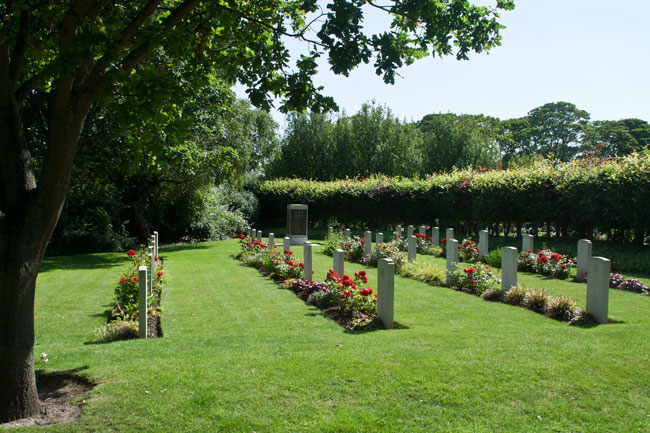 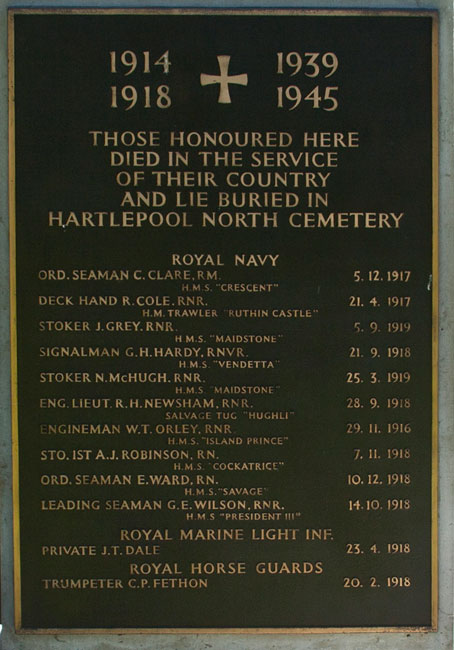 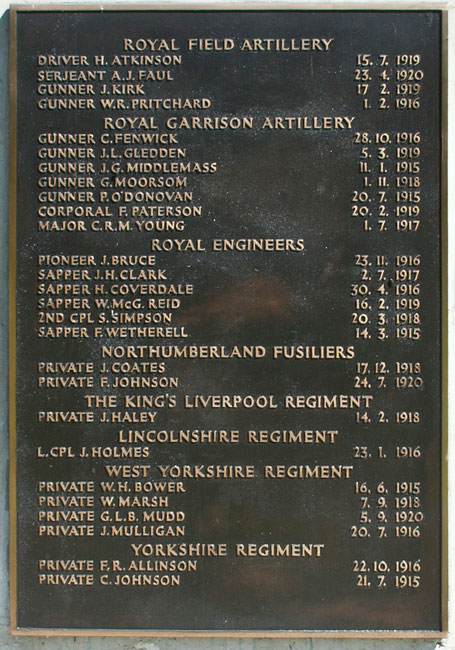 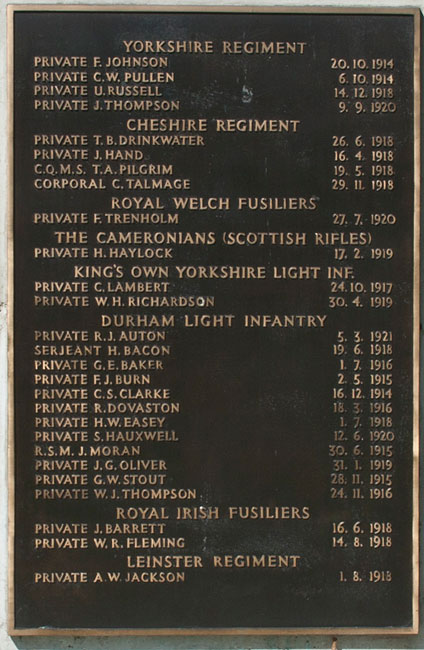 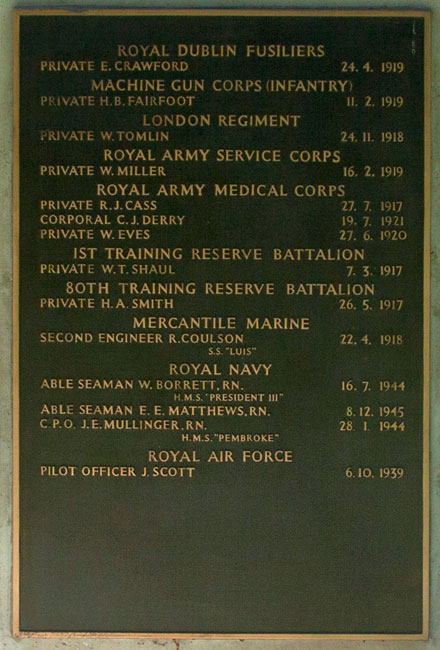