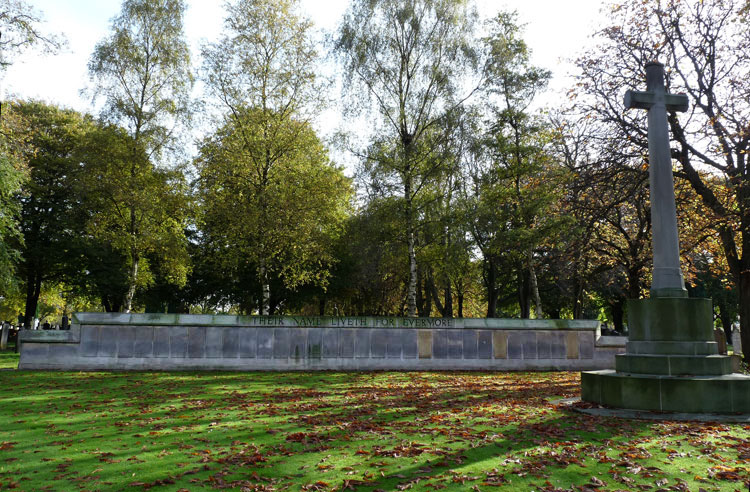 During the First World War, Manchester contained between thirty and forty war hospitals, including the 2nd Western General Hospital and the Nell Lane Military Hospital for prisoners of war. Many of those buried in the cemeteries and churchyards of the city died in these hospitals. During the Second World War, there was a Royal Air Force Station at Heaton Park, Manchester.

Manchester Southern Cemetery contains burials of both wars, the majority of them scattered. There are also separate plots for First and Second World War burials, but in neither case are the graves marked individually; instead, each plot has a Screen Wall bearing the names of those buried there. Each plot has a Cross of Sacrifice. In all, 803 Commonwealth casualties of the First World War, including 1 unidentified, and 475 from the Second World War, including 3 unidentified, are now commemorated in the cemetery; there is also 1 non-war service grave.

The Screen Wall in the Second World War plot also bears the names of 177 servicemen and women whose remains were cremated. Further memorials in this plot commemorate 17 Polish servicemen buried there, and a number of casualties of both wars buried in other cemeteries and churchyards in the Manchester area whose graves could no longer be maintained.

We are extremely grateful to Mike Berrell (<mike_berrell@ntlworld.com>) for providing the photos of the headstones and the cemetery.
Select a thumbnail image for a larger image which opens in a new window.