For a larger sized image, click on the thumbnail image. Close the window that opens to return to this page. (Photo is from that of 6th Battalion Officers, 1915)

The following notes are provided in Bob Coulson's biographies of Yorkshire Regiment Officers killed in the First World War;-
Edward Chapman was born at Budleigh Salterton in Devon on April 25th 1875 and educated at Aysgarth School and the United Services College at Westward Ho before entering Sandhurst
A career soldier with the Yorkshire Regiment he made 2nd Lt in 1895, Lt in 1897, Captain in 1901 and Major in 1911. He was appointed CO of the 6th battalion at the onset of war.
“The raising of the 6th battalion was a task for which he was eminently suited. A thorough and conscientious soldier his chief aim was the welfare and correct training of his men”.
He sailed with the battalion from Liverpool on the Aquitania landing at Lemnos and then onto Imbros in July of 1915. On August 6th he received his orders and called an officers conference at 2-30pm when maps were issued and he outlined the battalion’s objectives. With his men they landed at Suvla Bay on Gallipoli in the early hours of August 7th 1915. They then moved inland and massed at the foot of Lala Baba hill.
A charge was ordered on the Turkish positions during which bitter hand to hand fighting took place. Lt Col Chapman led from the front and was heard to shout
“Come on the Yorkshires”. Sadly just before midnight on the 7th a message got back that the “CO was killed”, he was 40 years of age.
The battalion chaplain was by his side soon after he was shot through the neck and wrote later to his father, “He died as he would have wished to die, a gallant soldier leading his men himself at the very front of his regiment”.
His body was recovered and today his grave can be seen in Azmak Cemetery at Suvla.
Lt Col E H Chapman was the eldest son of Edward and Mrs E E Chapman of Carr Hall, Whitby in North Yorkshire, the family also owned property at Ross on Wye in Herefordshire.
A memorial tablet to him can be found in Richmond Parish Church. 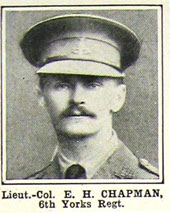 The photo above has been taken from "Illustrated War DeLuxe" and has been provided by James Pasby (<jampas@btopenworld.com>). Select the above image for a larger sized one which opens in a new window.