Select the thumbnail image above for a larger photo which is from a group of men of the 6th Battalion photographed in France (date unknown) and which opens in a new window.

Corporal Michael Kelly is shown in the above group of soldiers of the 6th Battalion by the "X" above his head. The photo is marked on the back as having been taken in France, though the date is unknown. However, if the officer with this group of
men is Lieutenant Casley,then the date would be early 1915, - as Lieutenant Casley was killed in Gallipoli in August 1915.

The above photo was supplied by Clare David (<claire_david@yahoo.com), a great-niece of Corporal Michael Kelly.

A biography of Michael Kelly was provided as part of an exhibition by the U3A Wessington War Memorials Project at the Arts Centre Washington, 3 - 17 November 2012. Select the thumbnail image below to read this biography which opens in a new window. 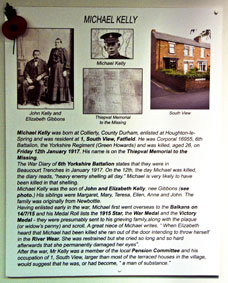