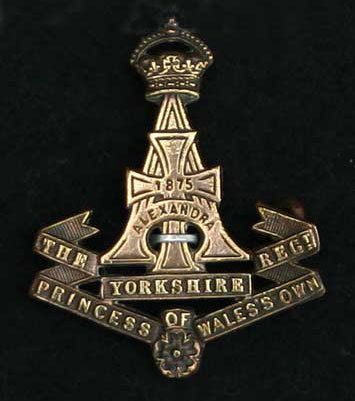 The full Roll of Honour, - names, ranks, regimental numbers (where applicable), date of death and age at death, can be dowloaded as a PDF file by selecting the appropriate link below.
Of the 9,000+ names on the Roll of Honour, 440 are those of Officers and the remainder Warrant Officers, NCOs, and men.
13 of the names are aliases; in these cases the family (true) name has been given as well as the alias.

If you see a name that you are interested in on the Roll of Honour then you can find out further details of that name by searching the on-line database on this website. Details available may include further information on the soldier's family, where he came from, and where he is commemorated or buried, - possibly also including photographs of the commemoration and/or grave.

However, the church Roll of Honour does not include a number of men who died at home, or who served in battalions such as the 16th, and does not include soldiers who were originally in the Yorkshire Regiment but who were transferred to other regiments.
By taking ALL those who served with the Yorkshire Regiment into consideration, the total number of lives lost is now seen to be over 9,200.