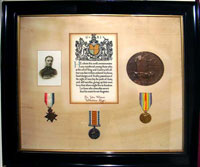 If you want to look into the military service record of a soldier who served in the First World War, there are three books which are invaluable in giving you the background information to make a start.

If you know that the soldier lost his life while on active service, there are two prime computer based resources from which to start your search;-

The Commonwealth War Graves Commission website.
and
Soldiers Died in the Great War.

This latter resource is available as a CD-ROM from the Naval and Military Press, or is available on subscription-based genealogy websites (such as Ancestry.co.uk). It may be possible to access this resource in Public Libraries or in Military Museums.

Other vital military records available on Ancestry.co.uk and other genealogy websites, include;-
1 The Medal Rolls Index - a card for each individual soldier where service medals have been claimed / awarded.
2 Service Records - only about 30% of these survive, as a consequence of enemy action in the Second World War.
3 Pension Records, - if the soldier was discharged to pension. Again, only a limited number of these records have survived.
4 Silver War Badge Records, - if the soldier was discharged during the war due to wounds / illness, these badges were issued so that the soldier could show publicly that he had "done his bit".

Once you have started your research, you may want to establish further details. The links below are for additional resources to help you further your research.
Also included in the links below is "A Family Memorial", which illustrates the medals and commemorative scroll in the possession of the family of a soldier who lost his life in the First World War. These medals and the scroll are often the starting point for a relative or descendant deciding to research the military history of a soldier.